A lot has happened in these ten weeks so I wanted to give you an update on what’s been happening at Suddreth Manor over the last couple of months.

At one of my appointments, it was discovered that I have what’s known as placenta previa – where all or a portion of the placenta is covering the cervix. This is problematic because the baby can’t exit they way he is supposed to, so that usually means a C-section, something that I was not looking forward to. But, my OB is fantastic, and rather than set me on a course of panic, she explained exactly what the options were and stated that we would keep the C-section in mind and that if I needed it, we’d schedule it, but that she wanted to check again in four weeks because the placenta can move out of the way as I continue to grow with the baby.

Four weeks later I went back and we checked and sure enough the placenta had moved! It is still sitting closer than she would like, so we’ll check again at 32 weeks.

Two weeks ago, I got to do my one-hour glucose test. I know a lot of women dread this test and even say they had a bad time with it, but I thought it was pretty painless. The glucola drink I was given was orange flavored, and really just tasted like super sweet water that had a thicker texture.

An hour after I drank it, they drew my blood to check my sugar levels. I met with the doctor, listened to our little guy’s heartbeat and had my belly measured to see how I was tracking (right at 28 weeks, they said). Everything looked great.

A few days later, I received a call from the doctor’s office letting me know that my results were back and that I had “failed” the test. I missed the cut off by nine points. That meant I had to go and do the three hour test; boo. I scheduled the appointment, and after too many day of gaffes to list out here, I was told that I wasn’t going to be able to do the test and that I’d have to reschedule for a different day. I wasn’t happy. I was hungry. I was frustrated. And as I got in to my car, I just broke down and cried because I couldn’t do anything else.

After getting myself composed, I rescheduled the appointment for a few days later. The three hour test isn’t the worst thing I’ve ever experienced, but it makes for a long, boring morning. I got to the lab a little before 9 a.m. and they did a blood draw to check my fasting level. Before we started the rest of the test I learned that there was a possibility that I could pass out and/or vomit – things I did not think about. And that if I did either of those things, we would have to stop the test. Which means I’d have to go back again. In my mind, I was absolutely NOT trying this test a third time. After that conversation, I got to drink another bottle of glucola – this time it was fruit punch flavored.

At 10 a.m., they drew my blood again. While I was sitting around waiting for 11 a.m. to come around for the next blood draw, I got super light headed. And then I got incredibly warm. I was sitting there focusing on a spot on the wall and breathing and telling myself I was not going to pass out. This happened two more times before 11 a.m. but fortunately, I never fainted and at the next blood draw I mentioned that I was getting very light headed and was told that I could take sips of water as needed – which helped a lot. Finally, it was time for my last draw and then I was able to eat some peanut butter crackers.

Last week was my 30 week appointment and I received the results from my test – I passed! No gestational diabetes for this lady. What a relief. The appointment was pretty straightforward; get weighed, blood pressure taken, listen to baby’s heartbeat. Everything looks great and little guy is growing healthy and has a strong heart beat. Now, I’m just waiting for my next appointment to see if everything is good with the previa or if a C-section is still on the table.

Other than doctor’s appointments, Suddreth Manor has been abuzz with preparations for our new arrival. You might remember, back in January construction started on the first floor laundry room. 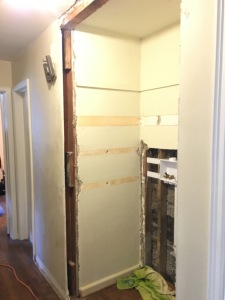 After some setbacks with delivery and installation, the laundry room is (mostly) complete but fully functional. It is really nice having the laundry on the first floor – it’s way more convenient. 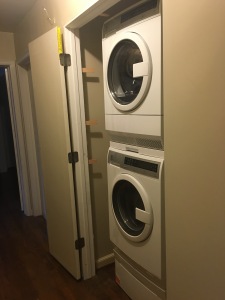 In addition to the laundry room, the baby’s room received a complete facelift as well. First, we had to remove all of the furniture that was in there already since we were using it as an office. Once we had everything out, Brett painted all of the walls. We have a crib, but we need to sand and paint it before we put it together. 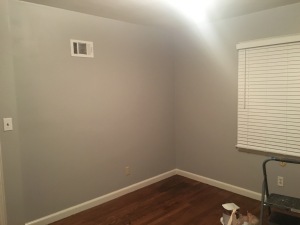 Baby showers are coming up soon (one in Oklahoma and one in Kansas), which is super exciting! Gifts have started showing up at the house and the biggest surprise was receiving the glider we had picked out. We had planned on having to purchase that ourselves, but one of our family members was incredibly generous and purchased it for us. Brett got it all put together and is currently in the baby’s room just waiting for our little one to come home so we can put it to great use. 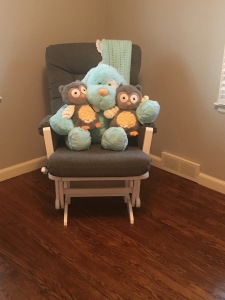 It’s hard to believe that our family of two will become three in just nine and half weeks! It honestly doesn’t feel like it’s been that long. So now I’m just waiting for my next appointment and nesting!